The voice of a generation, '90s icon and singer-songwriter Alanis Morissette comes to Walmart Arkansas Music Pavilion on Saturday 13th June 2020 on a tour that celebrates the 25th anniversary of her seminal album Jagged Little Pill! An album that spawned six huge singles, including "You Oughta Know", "Hand in My Pocket", "Ironic" and "You Learn", Jagged Little Pill captured the heart's of many with its confessional lyrics and Morisette's powerful voice. Joining her in support will be fellow powerful female voices that dominated the charts of the 1990s, Garbage and Liz Phair! 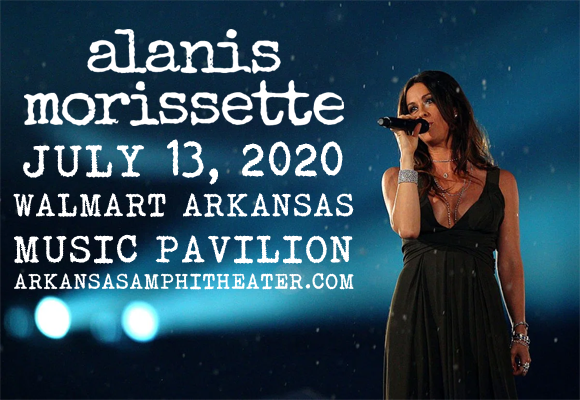 Alanis Morissette became a household name in the 1990s with the release of her breakthrough album Jagged Little Pill (1995). Her career began in Canada, where she released her first two dance-pop albums, before moving to the U.S. to work on a more confessional, grunge influenced record, which became Jagged Little Pill. The album sold an incredible 33 million copies worldwide, becoming the second biggest-selling album of all time by a female artist, as well as 16 million copies in the U.S., which made her the youngest artist at the time to have received diamond certification. It also sold over 12 million copies in Canada. It stayed in the top 20 of the Billboard 200 albums chart for over a year, and at the 1996 Grammy Awards, it won Best Female Rock Vocal Performance, Best Rock Song (both for "You Oughta Know"), Best Rock Album and Album of the Year. Jagged Little Pill also won six Juno Awards, among others. Throughout her career, Morisette has sold over 75 million albums globally to date. This year she releases her ninth studio album, Such Pretty Forks in the Road.