The hardest-working beach bum there's ever been, Jimmy Buffett comes to Walmart Arkansas Music Pavilion with his Coral Reefer Band on Thursday 9th June 2022 (Rescheduled from Tuesday 14th September 2021) for a night of sunny fun! The easy-going singer-songwriter will perform as part of his Life on the Flipside Tour, named after his 30th studio album! As all Parrotheads know, he'll play a selection of songs from his incredible career including, of course, his Big 8 fan favorites! Every show with the dude that is Jimmy Buffett is gonna be full of fun and leave you feeling so much better about the world (and maybe even tempted to try island life…)! 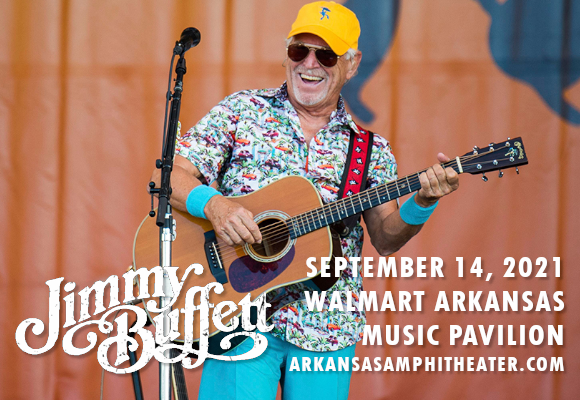 American singer-songwriter, musician, author, actor, and businessman Jimmy Buffett began his music career in Nashville in the 1960s as a country artist and released his debut album, Down to Earth, in 1970. However, it was a move to Key West the following year that helped him develop his definitive ‘Gulf and Western’ musical style (a fusion of country, calypso, rock, and folk music) and his laid-back, beach bum persona. A prolific artist, Buffett has released 30 studio albums to date, but he is best known for his tours, which have earned him a dedicated following known as ‘Parrotheads’. Of his 30 albums, 11 have hit the Top 10 on the Billboard Country Albums chart (with three number ones) and 10 have reached the Top 10 on the Billboard 200. Buffett’s biggest hit, "Margaritaville" (1977), is also the name of his brand that encompasses an American restaurant chain, a chain of stores selling Jimmy Buffett-themed merchandise, and casinos with lodging facilities. Buffett’s backing group are known as the Coral Reefer Band.