Chart-topping bastions of the alt-rock genre Matchbox Twenty will be performing at Walmart Arkansas Music Pavilion on Friday 24th June 2022! Responsible for some of the catchiest alt-rock hits of the '90s and early-2000s, Matchbox Twenty are nothing short of superb live – consummate professionals who know just how to get the crowd going! They'll be joined for the show by special guest support act The Wallflowers! 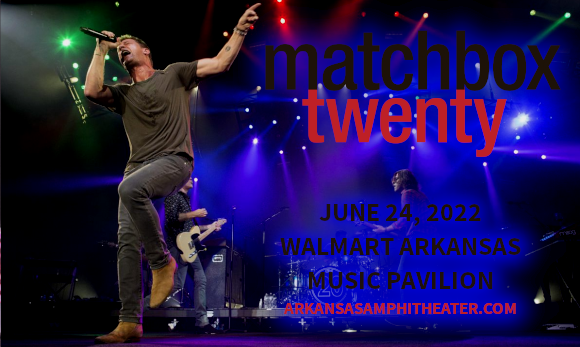 Fronted by Rob Thomas (of Santana hit “Smooth” fame), Matchbox Twenty formed in Orlando, Florida in 1995. Releasing their debut album Yourself or Someone Like You the following year, they were an instant hit, gaining huge radio play with the singles "Push", "3 A.M.", "Real World", and "Back 2 Good". The album reached number 5 on the Billboard 200 and received diamond certification from the RIAA after selling 12 million copies in the US, as well as going 10-times platinum in Australia, eight-times platinum in Canada, and five-times platinum in New Zealand. In 2000, they released Mad Season, which went four-times platinum in the US, peaked at number three on the Billboard 200, and launched the single “Bent”, which went to number one on the Hot 100. 2002’s More Than You Think You Are was similarly successful and marked their final album before a hiatus that lasted until their return in 2012 with the number one album North.